4 Data Science Lessons From the World of Sports

One of the toughest challenges of digital transformation and data science is telling the story of data, data which can often seem abstract and intangible.

But there’s a data story to be told anywhere you look. That’s the specialty of data scientists and the value of a data science certification.

More and more, data is playing a role in today’s most exciting sports. From evaluating players, to processes, to strategy, the world of sports offers plenty of lessons.

In Formula 1, fractions-of-a-second count. Races can be won or lost by the timing of a pit stop decision. Fresh tires at the right time can be the difference between a driver getting stuck mid-pack or charging out into the lead. A seemingly minor tweak to performance can make a huge difference in a qualifying lap, a starting grid, or most importantly, at the finish line. Data science processes data and translates it into real world results. This real-world application is the reason why these skills have become essential and sought-after in nearly all sports franchises.

The processing of thousands of pieces of individual data: tire temperature, remaining tire life, fuel range, aerodynamics, are all handled by the modern pit crew, data scientists. A certificate in data science allows for an individual to move beyond being a handler of statistics to be able to tell the larger story of what this data means to the overall performance of a team.

Each Formula 1 car houses 300 sensors which generate 1.1 million telemetry data points per second. This information is transmitted directly from the cars to the pits where a team of data scientists connect the dots between technical application and in-race strategy. Your certificate in data science should give you techniques to drive actionable insights from data. Through the course of each race weekend over 160 terabytes of data is sent between the race course and the F1 Media and Technology Center in Biggin Hill, England. Formula 1 has transformed this data into an ever more engaging fan and viewer experience with new real-time, on-screen tracking of data and forecasting of advantages for certain cars over others based on driver and team decisions.

Data science and its application to the fan experience have translated to real-world results for the sport of Formula 1. For the 2021 season 108.7 million people viewed the final race in Abu Dhabi, 29% more than the previous season. According to Mercedes boss Toto Wolff, “F1 surpassed the Super Bowl and the final race was only second to the final of the European Championships.”

Due in no small part to their innovations in data usage and fan experience, in 2020 Formula 1 showed a 99% increase in engagements across Facebook, Twitter, Instagram, and YouTube—more than any other professional sport.

In a sport where the cars resemble 200mph-plus computers, jobs requiring data science skills are essential, and the field is growing.

Sports teams continue to take in more data than ever and are doing so constantly. Teams reinvent and adjust to new data with each new season. With this fast-growing demand for additional data comes the growing demand for certified data scientists. The ability for data scientists to digest this new information and transform it into useful performance-driving practice is no longer a nice-to-have, but essential to their performance.

2002 changed Major League Baseball, and sports, forever. The Oakland A’s phenomenal regular season record of 103-59 and their subsequent run in the playoffs not only made for quality baseball on a modest budget, but even ended up being the inspiration for both the book and movie, Moneyball. The Oakland A’s and Billy Beane used a host of innovative data, never previously combined and analyzed, to transform their approach in building a winning Major League roster on a very limited payroll. Ever since, Major League Baseball teams have incorporated staff with a certificate in data science in their clubhouses.

Before Billy Beane’s data-driven approach to baseball, strategy for trades and dollars-spent was largely based on the hunches of scouts evaluating the ‘five tools’ – hitting, hitting for power, running, fielding and throwing. Coaches were resigned to leaning on observation and a few pieces of statistical information that did not amount to much more than was readily available on the backs of baseball cards. Intuition rarely translates to long-term success in a business environment. The front office needed to be able to communicate their goals with the coaches and scouts, the newly minted data team then drove the strategy toward achieving these goals to be tangible for all involved.

When the Oakland A’s boosted their use of data, they opened themselves up to a world of information that increase their performance far beyond teams that relied on large payrolls and mere observation to build their rosters. The A’s learned that a single season didn’t tell the whole story of a player’s performance, but rather the amalgamation and processing of statistical data gave a real window into the long-term viability of a player’s abilities. It wasn’t all about the home run, it was about the ability of the player to get on base consistently and their individual effect on the defense of the team, a layer of statistics that baseball had barely scratched the surface on previously. How does this transfer to your work environment? How do you bypass traditional thinking and use data to set a new trajectory for your organization? It all begins with a hypothesis and some skills. 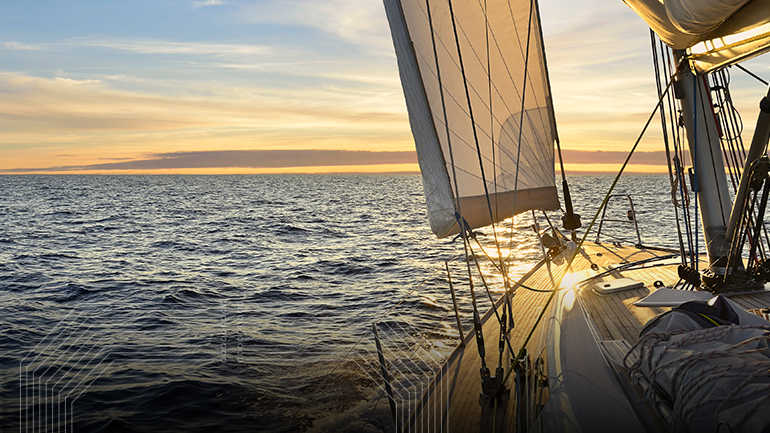 Communicating the value and purpose behind data models to fans and viewers without technical expertise can be challenging. Your data science skills should enable you to gain support for your models by explaining their context and providing value.

In SailGP, the data scientists began by defining a problem: How do we predict wind faster than the other teams?

Sail GP is a relatively new sport series that has been described as “the America’s Cup meets Formula 1.“ Finding “headers” and “lifts” while racing 60mph over water, measuring when the next puff of wind will find the giant wings of the racing catamaran. Minor adjustments to the tension of a line can make a boat slide across the water with very little resistance—just before a competitor finds the wind.

Data science is being used in new and exciting ways, allowing for entirely new measurements, learning experiences, and simulations. This world has been opened by data scientists. And the world, for SailGP is growing. In its first season alone, SailGP had a global event audience of 1.8 billion including broadcasts, social media engagement, press, and in-venue audiences. But how did a new sport engage audiences and experience so much growth?

SailGP teams process 30,000 data points per second. This data is streamed from every F50 catamaran and analyzed using correlation patterns, data enrichment, and machine learning. This data is pored over by teams to predict how their boat will respond to the next patch of wind.

This data is also used to design and enhance the fan experience. Wind direction and speed is overlaid in graphics displayed throughout the broadcasts of races. It helps fans better understand the decision-making process of teams and feel further invested in the sport of sailing. Fans can access real-time race metrics via the SailGP app where they can customize their own data-dashboards. None of this would be possible without data science. Data scientists learn to transform those 30,000 data points into one stream to help discern in-race strategies and transform viewer experiences.

This data has even allowed for the development of a new SailGP simulator. The simulator allows teammates to virtually race the F50s from any location and has been incredibly important during the Covid-19 lockdown. SailGP developed the Dynamic Velocity Prediction Program using data from their first season, and visualization technology. SailGP athletes can assume any position on the boat and work through various scenarios and race conditions. Fans will be able to experience the virtual F50, competing against a computer-generated boat or even against each other, at future SailGP events, making their experience even more immersive.

Data science skills have never been more important or in demand than it is in today’s world of sports. As teams look to gain an edge over the competition and leagues look to future growth, know that the demand for the flexibility and adaptability of data science certification programs will grow as well. Data does more than inform business decisions—it influences business decisions. Data scientists are strategic thinkers, master technicians, and problem solvers, and through certification are prepared to transform today’s data into tomorrow’s business decisions.

CertNexus is a vendor-neutral certification body, providing emerging technology certifications and micro-credentials for Business, Data, Development, IT, and Security professionals. CertNexus’ mission is to assist in closing the emerging tech global skills gap while providing individuals with a path towards establishing rewarding careers in Cybersecurity, Data Science, Internet of Things, and Artificial Intelligence (AI)/Machine Learning.